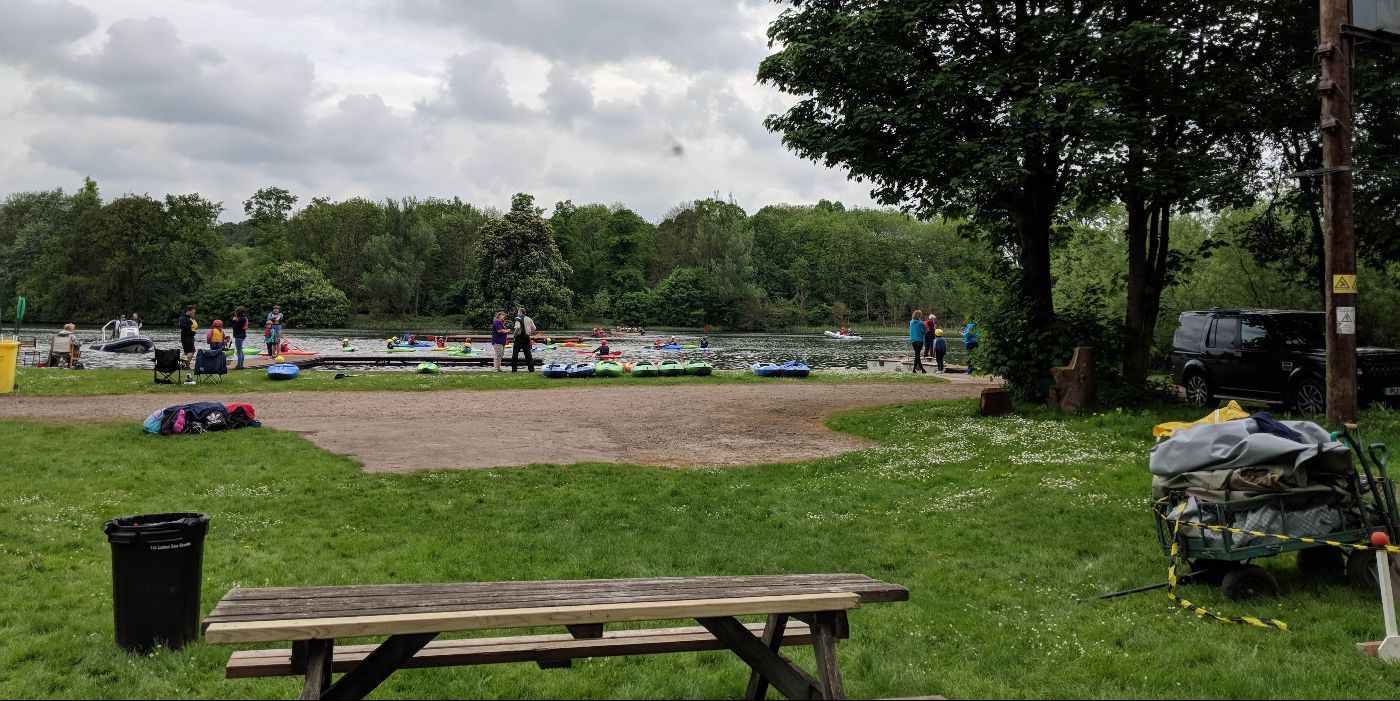 Out on the water

A wonderful day spent out on the water, we took 12 cubs to the 1st Luton Sea Scout's Boathouse to take part in 5 taster sessions for water activities. The day started off with a breif introduction and the groups being split into 5 teams, from this we began the activities.

Canoeing was first on our agenda, we split our team between 5 canoes and off we went into the center of the lake where we played a game of "Head, Shoulders, Knees and Jump" the premise of which is to get the participants to perform the song and jump as high as they can whilst, prefrably remaining inside the canoe, this was followed by a game of "Apples, Oranges & Pears" where you were given a fruit name and when it was called, you had to switch boats with another participant of the same fruit. We then made our way back to the jetti to begin our next activity.

The cubs then had to make their own water worthy raft using just rope, wooden poles and large plastic water drums. The rafts were successful however the urge to stay dry fell short on our cubs as a large portion of them returned to shore dripping wet, with the rafts however surviving. Time for the next activity.

Starting off with a small safety breifing the instructor showed us how to safely remove ourselves from the kayak in the event that it should either flip or start sinking. This followed by a launch from the shore into the water. We continued with a 5 minute row around to get used to our vessles and then the main game begun, British Bulldog. For those to young to remember this game involved a tagger in the middle and all other participants attempting to get from one side of the play area to the other without getting tagged. After several iterations of this game we performed a procedure called "Rafting Up", this involves all involved geting next to eachother and then holding onto those eitherside of yourself's kayaks. From this the instructor fancied playing a game of "Head, Shoulders, Knees and Jump", this was particularly more difficult than in the canoe as you have around a third of the space to stand in. Once this game was up the instructor decided that 2 leaders in particular were looking rather bored and so insisted that they try and switch kayaks, this was done by one running along the front of the line and the other running along the back. Needless to say neither made it to the others boat without falling in the water.

The most important part of the day, our group retreated to our shelter for a spot of lunch and a discussion on how people are enjoying the day so far. Up until this point the weather had been warm and mostly sunny, but just as lunch was coming to a close the heavens decided to open and a fine vail of rain poured down on us, on and off, for the remainder of the day, this was no matter though as it was plenty enough warm and we were cerntainly wet enough by this point.

Our team was once again split in half, with one going on a motorboat ride around the lake and a touch down the river whilst the other rowed their way around in circles. This activity was certainly the most exhausting of the day for those rowing the boats.

The final activity of the day, our team split into four, each maning a sail boat with an instructor at the helm. The instructor gave each member a role to play with controling the boat, and along the way teaching the group names for the various parts of the boat. About half way through the activity the instructor decided it was time to teach us a quick way of turning the vessle. It involved a member of the crew precariously balanced on the edge leaning back into parallel with the water, just tipping their head into it, whilst the crew member opposite held their feet in place with the assitance of a toe strap. This was followed by the crew attempting to walk their way around the front edge of the boat and finally a game of, yep you guessed it, "Head, Shoulders, Knees and Jump" for those with boats with adequate room.

This marked the end of a very adventurous day, in which the cubs and most leaders tried many new and exciting activities. We would like to thank those at the 1st Luton Sea Scouts for puting on and running what was a very special day, and we very much look forward to returning next year, provided we can get the tickets.

As an added layer of security to protect you and the members of our group, You must be a registered member to access these Comments.

We apologise for any inconvience.